Another Ethan first: He played the belly drum.

Ethan found it so amusing to make percussion sounds on his own belly that after a while by himself, he took my hand it put it towards his belly, asking me to join the band. Typical for boys Ethan’s age, he has a little extra padding on his belly, which I found good for making a nice variety of sounds.

Another Ethan first: He made a super silly face.

Ethan has been growing increasingly playful and expressive, which he took to next level when he made a super silly face like this. He knows how to put it to good use, too: If he’s sitting on my lap while I’m talking to someone and he wants my attention, he knows he can turn around, put his mug smack in front of mine, and give me the face. He certainly gets my attention, and while someday it might seem like a rude interruption, for now it’s just cuteness and comedy. 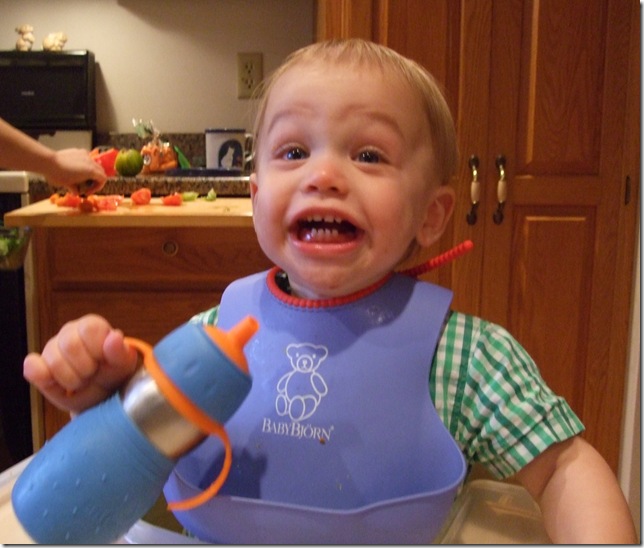 Ever since Ethan was little and has been taking baths in the regular bath, we purchased a protector that goes over the spout so that if he stands up, he won't bump his head. It is not only a proctor, but it also causes the water to flow out like a fountain.

Ethan has always been timid around this fountain. In addition the noise of the water coming out was loud, the normal loudness from turning on the water. He would once in awhile touch the flowing water with his outstretched hand, only to find that it diverts the water and causes it to spray in various directions. Thus, he tended to avoid fountain whenever it was turned on.

Today during bath time, Ethan was happily playing with his bath basketball toy. After making a basket, the ball would float down and go underneath the fountain. He wanted the ball so bad that he decided to brave the fountain. He very cautiously inched his way forward, went to the side of it, and reached down to get the ball. As his body got splashed by the fountain, he realized it wasn't so bad. The next time the ball went down under the fountain, he decided to go straight through the fountain, head first. He closed his eyes, water went on his head, but he kept going. He realized that as soon as he passed the water barrier, he could open his eyes and the water was no longer splashing him on the head, but on the back.

He must have liked the feeling of the water splashing on his back, because he then decided to stand up and put his entire back against the fountain. He got a full body back wash. He stood there for about 30 seconds, smiling. He did this repeatedly. I was so proud of him for overcoming his fear of the fountain and happy at his new discovery of enjoyment. 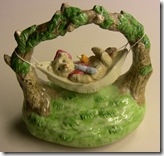 On a wall shelf in Ethan’s room is a lovely, old music box that Beth had from when she was little. It is a porcelain sculpture of a bear lying on a hammock. Each night at bedtime I take it by Ethan in the crib and wind it up. It plays “Oh What a Beautiful Morning” (Ethan doesn’t know the difference). After seeing me wind it a few nights, Ethan decided he wanted to wind it, too. The spring had been too tight for him to wind it on his own, so I have to help. Tonight, however, I decided not to help and instead see how he’d do completely on his own.

Ethan had other ideas: after a brief attempt at winding with his right hand, he reached with his left hand to take my hand and place it over his right hand. Even though he doesn’t know may words, he knows in his own gentle and wonderfully cute way how to ask for help.

Ethan has come to the appreciation of order, and he has made it a habit all by himself to point out to something that might be not quite what he is expecting. We think it probably started with whenever food would fall on the floor from his high chair, and we must have said "Oh-ohhh" just out of habit. Ethan quickly caught on. Today we noticed Ethan doing this when Grandma and I were walking to our car from the mall, strolling Ethan. As we were walking, Ethan noticed some litter on the road about 20 feet away. He pointed to it and said, "Oh-ohhh!" About a week later, Daddy had on a painting shirt (we have been staining our deck), and when Ethan saw all the dried spots on Daddy's shirt, he knew something wasn't normal and said, "Oh-ohhh!"

There are many more "oh-ohhh" examples that have occurred, but too many to list. It is amazing to see how Ethan has realized that this world is not perfect, and we are thankful that he can recognize the "oh-ohhs". Often, it is quite funny what he considers an "oh-ohh".