Another Ethan first: He applied a science song.

This morning Ethan was listening to a collection of science songs. We talked about some of them, including the question raised in “What is Gravity?” about why we don’t get winged off the Earth as it spins.

In the afternoon, we were playing swing-set kickball in the backyard. When the ball rolled down a little hill, Ethan started singing, “Gravity, gravity…”.

Another Ethan first: He built a model of the YMCA gymnasium.

Ethan has built cars, tractors, and such out of Legos for a while now, but Tinkertoys, being a bit more abstract, had been a playset where Ethan would ask me to make combines, garbage trucks, and such, for him to modify and play with.

So it came as a surprise to walk into his room and see a full-size, from-scratch creation. He built a model of the gym that he goes to at the YMCA for gymnastics lessons, with enhancements inspired by carnival merry-go-rounds. His model features a couple climbing ropes, a “round-around tower for swinging on” and a “spinning tower”. 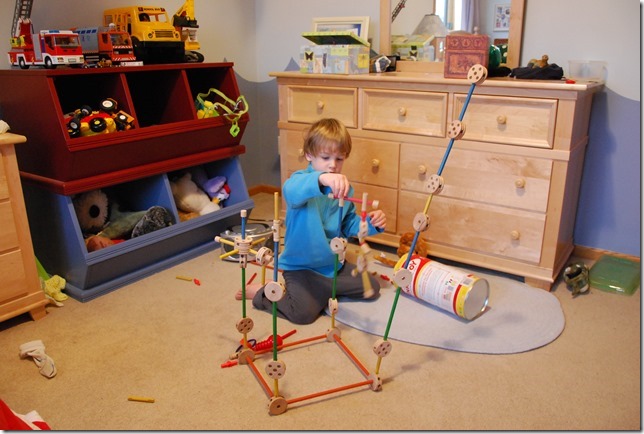 Shortly after he completion, I played an evening game of glow-stick Ultimate Frisbee, afterwards promising the players that if they had no use for their glow sticks, my four-year-old would put them to good use. Indeed he did, both on his model and, after its destruction, all around his room. 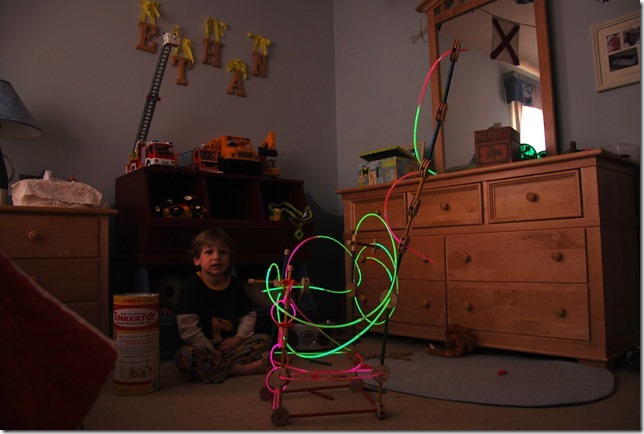