Another Ethan first: He found the Big Dipper.

It was a perfect celestial autumn evening: cool, calm, not a cloud in the sky, and the half moon tucked safely below the horizon, which was a soft blue gradient in the afterglow of the set sun. Ethan spotted the first star, then more stars, as we lay atop his backyard play set. Slowly, the sky filled with them.

I carried Ethan along the meadow path, the street lights and lights from neighbors’ windows hidden by the tree line. We heard geese honking in the river and saw an occasional gaggle fly overhead. As we approached, we could make out their shape against the glowing horizon’s reflection on the water, until finally, with a step too close and an ill-timed crouch, the shadows fled as we heard the stirring water, flapping wings, and excited calls.

In the ensuing quiet, we took in the now fuller sky – its brilliant stars, its red planet twinkling lustrously, along the horizon chasing after the sun. We even saw the occasional moving star, blinking red and white –airplanes, as Ethan learned.

In the north, hanging low like a ladle of cream sufficient to satisfy every kitten that could possibly be hiding in the sky, was the Big Dipper. It stood out bright and bold as I showed Ethan the handle and the cup. The seven points of light in the sky were clear to Ethan like a picture in a story book. Later, when we were walking up the back yard, I asked him if he could show me the Big Dipper. First, he pointed randomly at the sky. I said, no, find the Big Dipper in sky. He searched around, and just has I had pointed out the famous asterism 15 minutes earlier, this time, he pointed it out to me.

Earlier this year, Ethan’s grandpa and uncle teamed up to make play tables for the grandkids. Next, I protected Ethan’s table with non-toxic Clear Coat from The Old Fashioned Milk Paint Co. And finally, today, the train set arrived. We set it up while he was napping. When he saw it, our often wild monkey was surprisingly quiet, studying the trains and tracks. As he carefully guided the trains, he seemed more like a child playing with a new chess board than the kid in a candy store I was expecting.

There is a product called SureTrack that locks the tracks together. We’d read reviews that said it was a must have for this type of train set. It doesn’t look like Ethan will have a use for it. The SureTrack packaging says it’s for ages 3 and up; after seeing Ethan playing today, it’s hard to imagine a child that age needing it.

After the three of us played together for about a half hour, the toy held his attention for I don’t know how long before it was time for dinner, a walk outside, and sleepy-sleepy-now. For a moment, it looked like pulling himself away would be too great a challenge, but the promise of playing more later changed his mind, making the experience enjoyable from end to end.

Update: When Ethan woke up the next morning, the first words out of his mouth were, “Downstairs. Choo choo train.” He played trains for hour before coming up for breakfast. 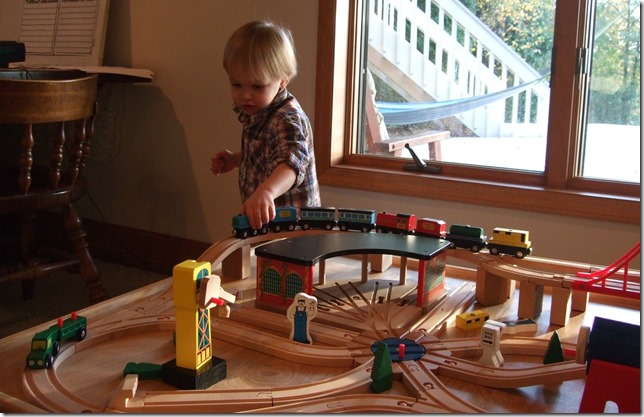 Another Ethan first: He saved up.

Tonight for dinner, grapes were the bargaining chips (in exchange for spaghetti squash, mostly). Ethan decided he wanted two grapes. I told him that to get two, he needed to earn one (a bite of squash), not eat it, and then earn another. It took a few tries, since the grapes are so tempting, but he figured it out. After enjoying the fruits of his labor, he decided he wanted three grapes. He saved up for that, too. 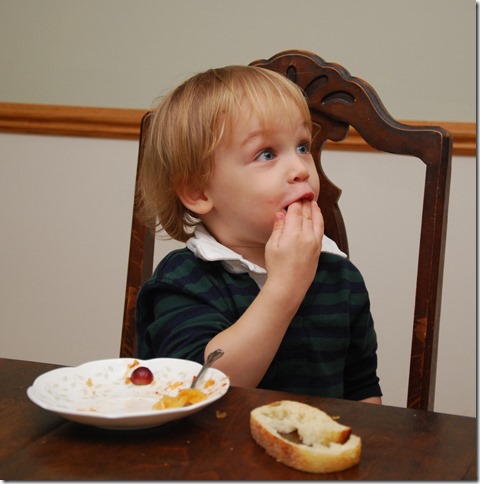 Another Ethan first: He played the piano like Daddy.

From upstairs Beth heard the sound of piano playing – not a song, just playing around: some glissandos and simple notes. She had to go downstairs to look. Was it Daddy just toying around, or was it Ethan? She found it was Ethan, who has now discovered a more delicate form of expression on piano.