Another Ethan first: He gave Eliana a sled ride on the ice.

Ethan is taking very well to ice skating. I can tell he genuinely enjoys the ice for its own sake – not just for the fancy-non-campfire s’more he had afterward. 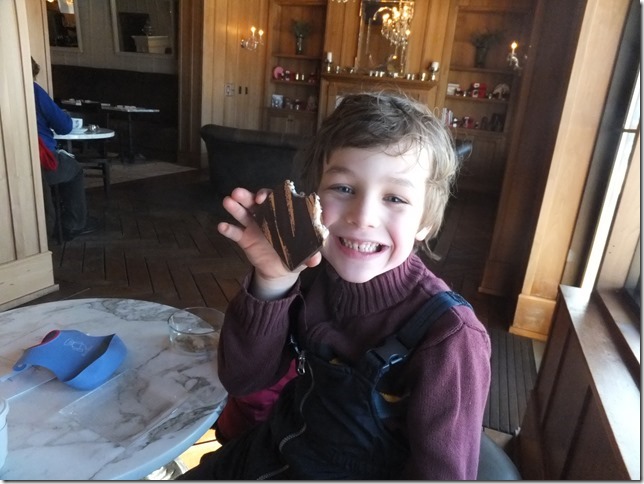 The kids had a great time at the Children’s Museum of Green Bay and our interlude at Chuck E. Cheese’s in between. At the mouse house, our fuzzy host showed up to lead the children in his trendy rodent dance. Eliana was intimidated by Chuck E.’s size, so she stayed close to my side. Ethan was right in the mix of kids, but he wanted no part of the antics. His peers were dancing around, but Ethan just stood still with a willful look on this face. 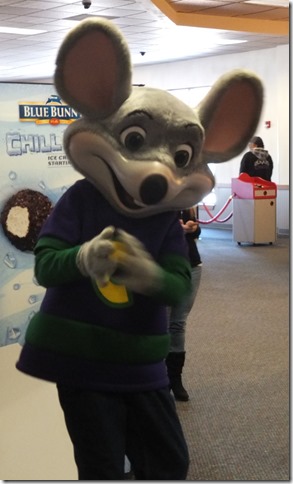 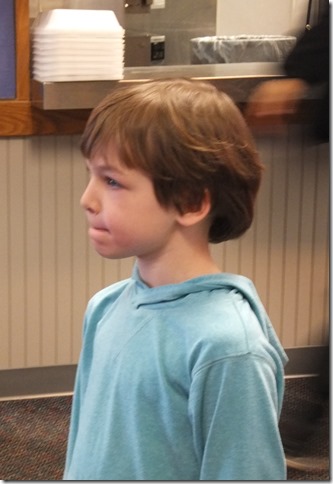 Back at the museum, Ethan repurposed the the water flow exhibit. Its intention is to show various current patterns as you place obstructions in a stream. Instead, he mostly learned that when a steady flow enters a closed system, no matter how hard you try to stop it, that water is going to go somewhere. The same diverters designed to pin into the stream bed stack nicely into a dam as the current’s pressure holds them together. Ethan raised the water to three times its normal level, right to the brink of the exhibit’s capacity.

I instigated and played a large role in the experiment; however, the idea to go fishing in his newly fashioned lake was Ethan’s alone. 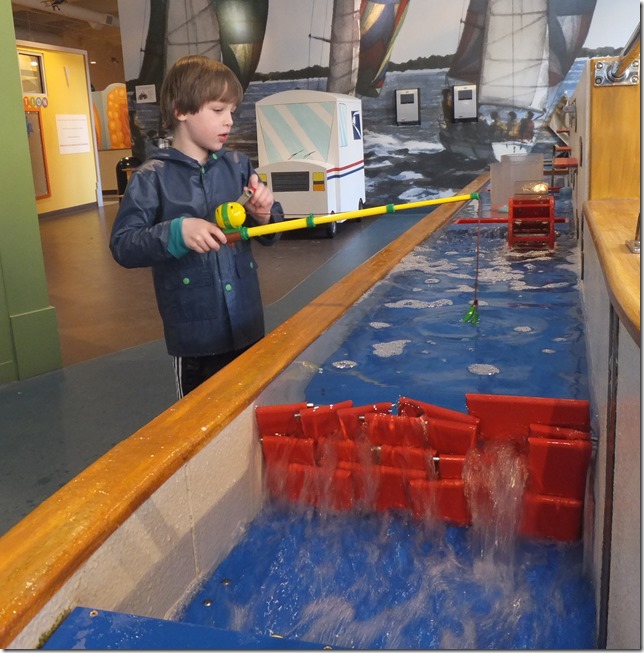 An Eliana first: She found her marbles.

This isn’t to imply that she ever lost her marbles. On the contrary, Eliana keeps a detailed inventory of her toys, even ones she hasn’t used for months. This morning, she asked me to dig out the marble run game that had been stored away in a linen sack in the unfinished part of the basement since the summer, waiting for the kids interest in the toy to renew. I built up a run for her and showed her how to send through it the few marbles that were in the sack. Eliana then told me that she knew where the rest of the marbles were. She tried to describe the location, but I couldn’t understand where she was talking about. As I carried her downstairs, she pointed to exactly where they were: inside a rarely used box of pens and pencils high up on a self. In the box was a re-sealable plastic bag full of the rest of the marbles for the run. 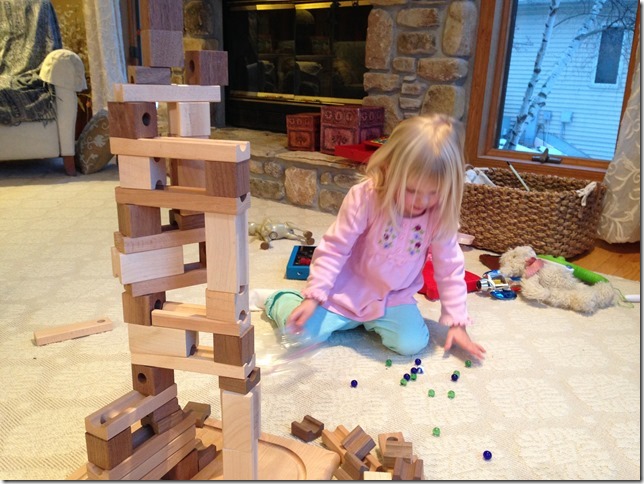 Another Ethan first: He skated on single blades.

It was a perfect day for ice skating: just below freezing, minimal wind, and smooth ice. Ethan tried out his brand new single-blade skates for the first time. His skating looked more like walking at first, and there were plenty of tumbles, but within about fifteen minutes, he had the basics of gliding. Meanwhile, Eliana was much more at ease this year on her double-blade skates. She’s old enough now to keep her balance and move around, but still a small enough puffball that falling is part of the fun. 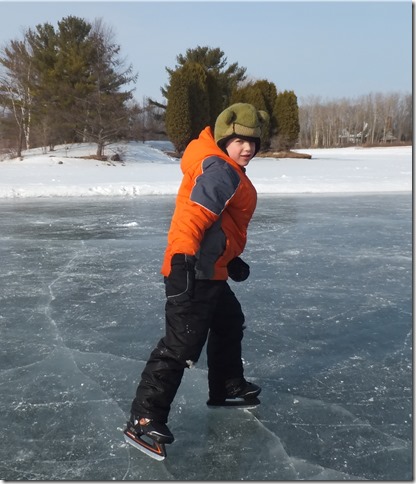 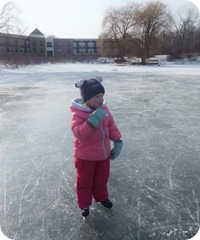 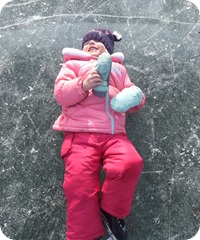 An Eliana first: She sewed a bug.

I’m pretty sure we had told her the sewing machine was off limits, but this was too funny to raise as an issue. 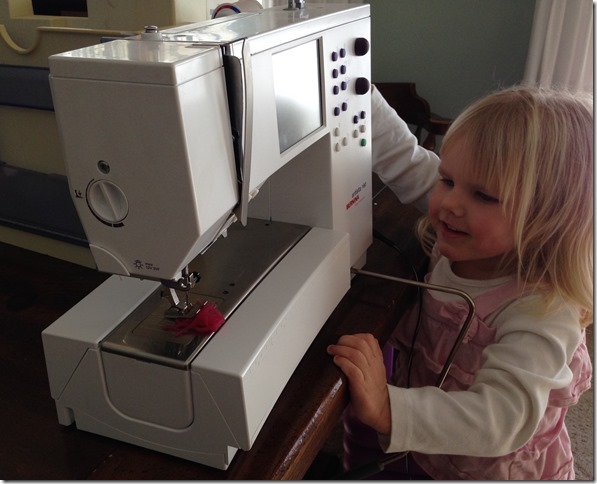 Another Ethan first: He caught air on a sled jump. 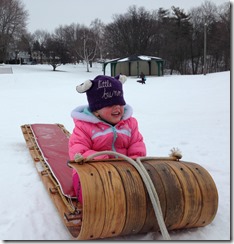 The first two times down the hill, Ethan rode his tube and aligned himself perfectly with a jump ramp, sailing through the air. Once I got into position to take a video, though, he went down and missed the ramp to the right. After I took Eliana down on the toboggan, Ethan tried again, and missed again. We all had a fun time sledding, and I hoped one of Ethan’s jump attempts would be successful, but Eliana didn’t hold out that long.

Once she said she was cold, I told Ethan he could take one more run down the hill. Then I told him that this time I knew he would hit it. Instill confidence and set high expectations… it worked! His last run was perfect, even better actually, because he had switched to the saucer, which makes the landing more dramatic – far too jarring for me (I’ve tried), but Ethan loved it.

An E&E first: They worked together to build a snowman.

It took almost an entire winter season to get enough snow and a nice day for a good snowman, but it was worth the wait. I rolled out the bottom, Ethan the middle, and Eliana (with Ethan’s help) the head. Ethan thought it would be good for the snowman to pet a snowbunny, but Eliana was ready to go inside. So Ethan and I finished the project with just the two of us. Happy snowman! 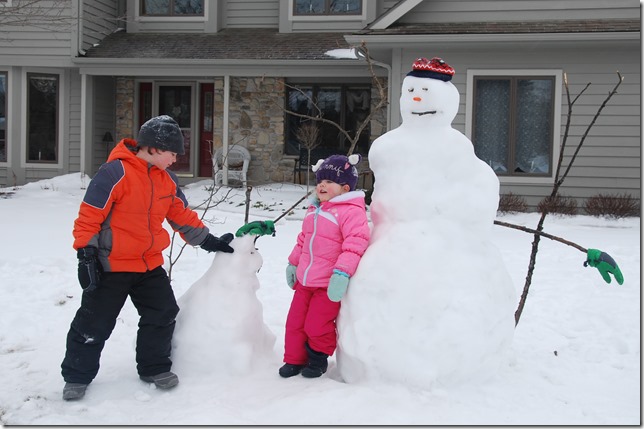 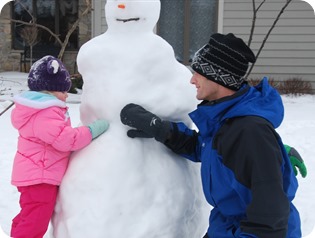 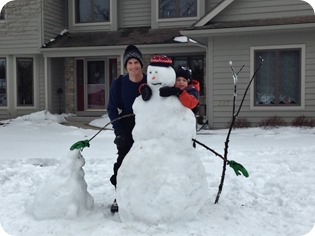