Another Ethan first: He climbed a ladder.

Ethan has gone down the slide on the neighbor’s play set dozens of times, most recently all by himself by climbing the arched ladder to the platform. Today, to inaugurate our purchase and relocation of the play set, he took the most direct way into the tower: straight up the vertical ladder.

Another Ethan first: He closed his jack-in-the-box.

Exactly two months after learning to pop open the jack-in-the-box, Ethan can now perform the delicate act of reclosing it. This is no simple task, as his jack is a little butterfly with wings that tend to get in the way of closing the lid. It helps that Ethan has little hands, one to hold down the butterfly and slip out at the last second while the other closes the lid. 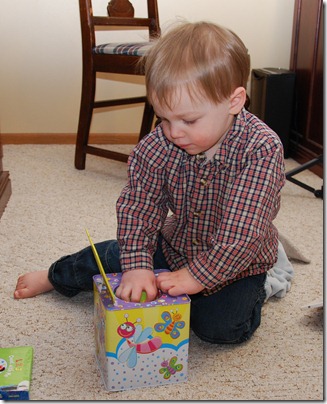 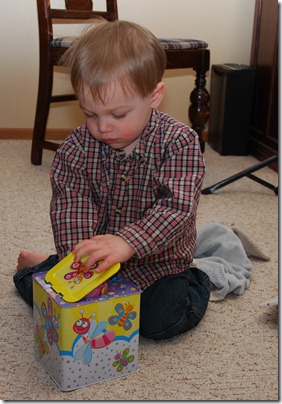 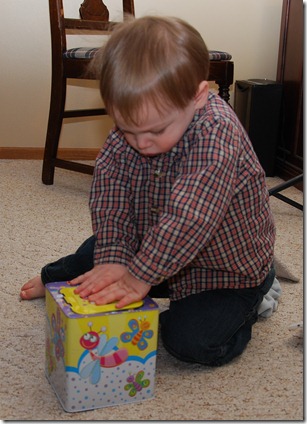 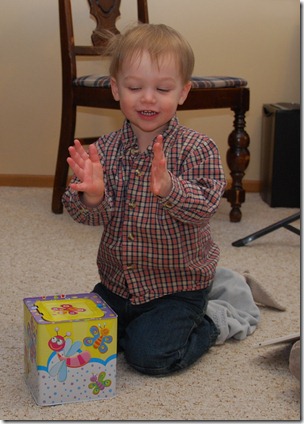 Another Ethan first: He talked in his sleep.

He wasn’t comprehensible, which I think is common for sleep talkers. Of course, Ethan is used to not having full articulation, so should it be any surprise that even in his sleep, he fully extended his arm to point through the crib slats to some supposed object of his dreamy desire?

Another Ethan first: He asked me to help him find his bun.

When Ethan wants something, he’ll often emphatically repeat a word related to what he wants. If I don’t understand what he’s asking, I’ll tell him, “Show me what you want.” Then he will point and if need be walk over to whatever he wants to eat, discover, or play with.

This happened today when he wanted something that sounded like “bay”; however, his usual directness in leading me was replaced by tentativeness. He slowly led me through a few rooms, retracing his path a few times, repeating “bay” as he pointed in front of him. As the journey lengthened, his version of dismayed desperation was welling up in him. Fortunately, he spotted Big Blanky Bun lying on the dinette floor, and I realized that for the first time, he couldn’t have shown me what he wanted, because he hadn’t known where it was. But now he did, and as soon as he scooped up his bun, Sucka came and contentment reigned.