An Eliana first: She inspired a profit motive.

The children do most chores around the house because it’s just part of family life. Ethan has are some optional chores, rather like extra credit, that he can choose to do in exchange for money for spending on frivolities that I’m not willing to buy him. While the value of that money (or its absence) seems important to him as we pass the candy isle, it doesn’t rise to the same level on the job site.

Eliana has a contagious willing spirit. Any attempt she makes at a task instantly motivates her big brother. When I offered her Ethan’s job of moving rocks onto the the berm that had spilled past its border, Ethan had a sudden inspiration, and I had two willing workers. 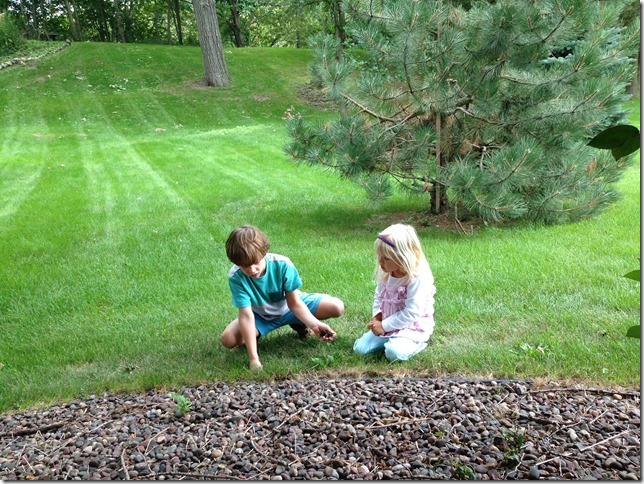 An E&E first: Ethan reported that Eliana swung by herself.

Ethan has been teaching Eliana to pump her legs when she swings. I reminded him that there was a time when he was learning to swing. We’d occasionally looked back on his first-time accomplishments, looking through the blog posts and his first year book. He showed his familiarity with how I record them when with great excitement, Ethan announced, “An Eliana first: She’s pumping her legs and swinging.”