Another Ethan first: He critiqued an opus.

Ethan and I made a last-minute trip to the theater where Beth plays in the orchestra. I was expediting the publication of a booklet that accompanied an anniversary gift for the maestro. After my work was done, Ethan and I stayed around to listen to a bit of the rehearsal, since he doesn’t go to the concerts yet.

We went up to the balcony of the theater, where Ethan looked on at the playing with sustained interest as the orchestra concluded a short piece. With the music stopped, Ethan’s interest waned, and so we made our way to the balcony exit ramp. As we started down, the orchestra began playing another piece. Ethan turned around to see, and we headed back to our front row seats. Ethan was captivated throughout the whole piece, which the orchestra played without interruption from the maestro for about five minutes.

The opus was a jazz violin concerto. Among its unusual features was an ending with the solo violinist playing a squeaky high note on his E string backed by a dissonant chord from the orchestra. The last measure concluded, and the hall fell into a momentary silence, broken by a brief commentary from Ethan: “uh oh”.

Another Ethan first: He hit a ball with a bat.

The equipment was a birthday present (2 years today). On his very first try he hit what might have been a seeing-eye single between the first and second basemen. 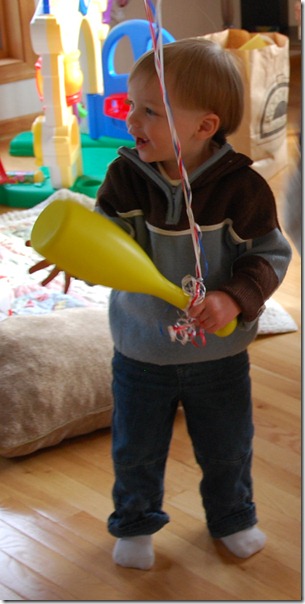 Supposedly, Ethan is learning by watching us, but I don’t remember showboating “Look ma, no hands!” any time since he was born. Regardless, swinging in the back yard has taken on a new adventure for him now that he has gone hands free. This no hands business has carried over to other areas, such as when I give him the bouncies while while carrying him down the stairs. That’s all good, so long as he doesn’t try to pull his stunt on his play set on the regular (non-infant) swing. 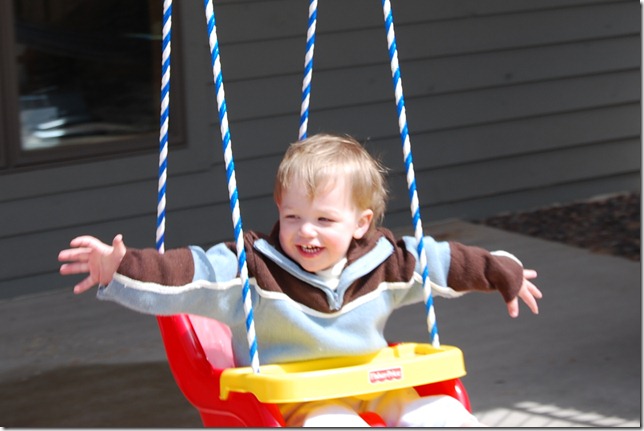 Another Ethan first: He rode a tricycle.

This was also the first time I saw him get really frustrated. A couple times, he didn’t know which leg to push with, but with some persistence, he figured out the sequence and was on his way.

Mommy has been reading Mr. Brown Can Moo! Can You? to Ethan lately. One of the things Mr. Brown can do is whisper. Tonight when I whispered “good night” to Ethan as I was leaving his room, he whispered back, “good night”.

At peace with a promise

Ethan was not a happy camper at bedtime tonight. We were thinking we’d just have to put him in the crib and hope for Sucka to come to the rescue, but then through the overwhelming sadness I heard “milk”. We had just brushed his teeth, so I offered him water instead: I put him in the crib as I told him, “Wait here and I’ll be back in a minute with some water.” To my surprise, he immediately stopped crying and looked at me with anticipation. It was the first time he was so clearly swayed by a promise of something he had to wait this long for: he understood what I offered, even though he couldn’t see it at the moment, and he was content to wait alone a minute for me to run downstairs and get him some water. When I got back up, he was still content, and then very happy to have his water. With that, sleep came easy.