Another Ethan first: He hid his face.

Ethan happened to have a bib on during a diaper change, so to keep him entertained, I flipped it up over his face and asked, “Where’s Ethan? Where is he? Where is he? Where is he? …” Then I pulled the bib down and answered, “There he is!” He giggled with excitement, as he has countless times when we’ve played the game. But this time, he took hold of the bib and hid his face from me all by himself. I filled in the vocal part; he did the peek-a-booing, half a dozen times or so. He was giggling away, while I was trying not to look to stunned from witnessing another wondrous surprise.

Another Ethan first: He completed a lap around the house.

Starting from the family room, he crawled to the music room and then proceeded to the front foyer. Next, he passed through the dining room. As we saw him coming around the kitchen corner, we realized his plan. He headed for the dinette, and ended up back where he started in the family room—a full circuit.

Another Ethan first: He drank on his own in his high chair.

Ethan has been holding his bottle while in our arms for a couple weeks now. When he was in his high chair, Beth gave him some juice in his BPA-free plastic bottle. He took it by the handles and drank it all. Beth just provided the refills.

The good news is that even though he knows he can drink on his own, he doesn’t mind still being held—because we’re not ready to give that up. 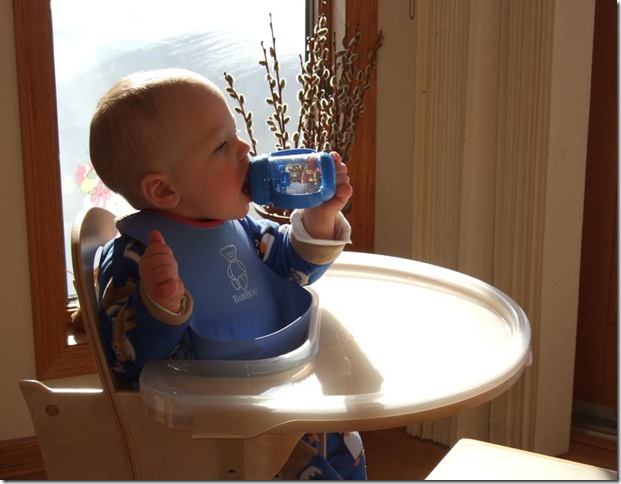 Another Ethan first: He felt all the animals in his book.

Until now, Ethan has not shown much interest in his bedtime books, other than as something to eat. This evening, while Beth rehearsed with her violin duo, I read Ethan a book with tactile pictures of farm animals. He was patient and still, and carefully felt each animal. He didn’t seem disappointed that the book had no bunnies or kitties; he already knows what they feel like. 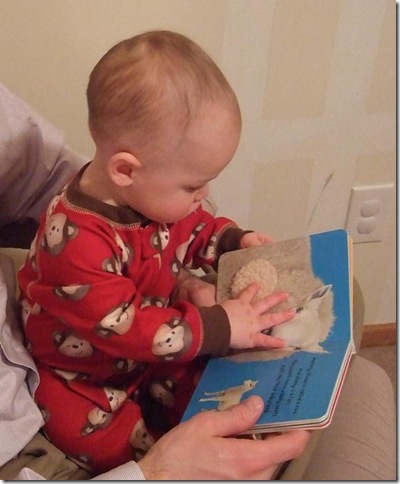 Another Ethan first: He demonstrated his bigness.

Grandma has been asking our boy, “How big is Ethan?” for months now, giving him the answer, “So big!”, and teaching him how to raise his hands to show us. Mommy has likewise been encouraging Ethan lately. Today, Ethan caught on and now gives us a visual answer himself. 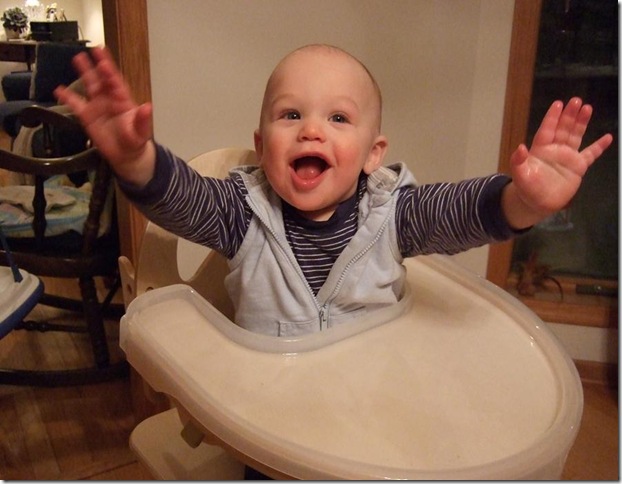 Another Ethan first: He stood on his own, momentarily.

This morning, Beth put Ethan down on his feet. Normally, he sits down as soon as you let go, but this time he stayed standing, balancing himself, for about two seconds.

Another Ethan first: He drove his truck.

He may be still in first gear for now, but he’s moving.

Another Ethan first: He freed himself from his wrist rattle.

Since long before Ethan would grasp objects for any length of time, we occasionally attached a rattle to his wrist to keep him entertained. For a while now, there hasn’t been much call for that, but today, for old time’s sake, Mommy tried.

We found that Ethan is no longer as accommodating to the idea as he once was. First, he tried to shake the rattle off, which only served as comic frustration. Next, he switched to using his newly acquired teeth, which were the key to bunny rattle freedom.

During dinner, we were playing around, and he bit my nose. Something felt unusual. I checked, and sure enough, he has a top tooth poking through to oppose the bottom ones. They sure worked well for the budding escape artist!

Another Ethan first: He put his toy away (temporarily).

Such a good boy: he cleaned up without even being asked, crawling over to his toy box with his bunny rattle and tossing it in. Seconds after the job was done, it was back to play time with the rattle, making the victory short lived.

Another Ethan first: He picked up his toys (as an extension).

I was holding Ethan in church as usual, and, as usual, he managed to drop his stuffed animal on the floor. After I picked it up a couple times, I realized that Ethan might be ready to assist with the recovery process. The next time the kangaroo (yes, it wasn’t a bunny!) hit the floor, I held Ethan mostly upside down so that he could reach the toy. He grasped it, then I retracted my personal arm extender, and we were back in business with Kangaroo and Joey.

Another Ethan first: He drank a whole bottle holding it himself.

We’ve always used glass bottles with Ethan, since the chemical Bisphenol A leaches out of most plastic bottles. Glass bottles are heavier and have no handles, making them more difficult to hold. But he’s got the hang of it now and can drink the bottle down all by himself. 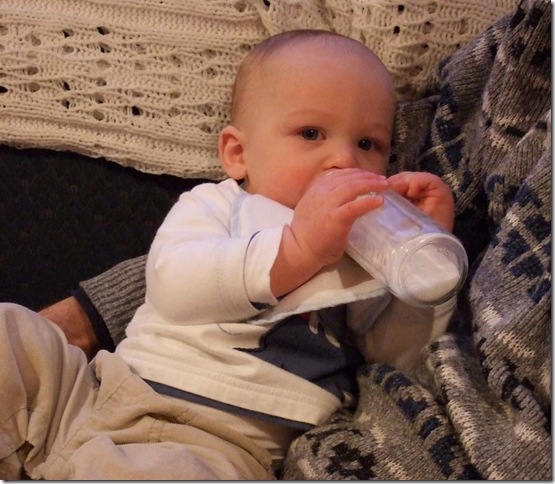