Another Ethan first: He took Big Blanky Bun for a wagon ride.

What better way to go for a wagon ride than sporting a hat and scarf that Mommy is sizing up in preparation for Hollandfest? Only something was different this time: instead of me pulling Ethan in the wagon, our little boy was walking down the street beside me pulling his bunny behind him. 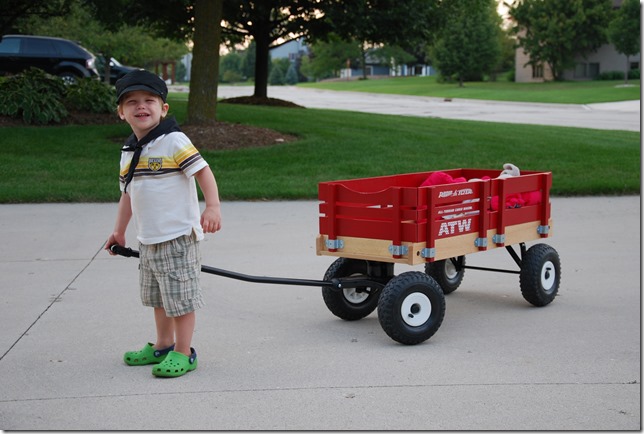 What do you mow?

Sometimes Ethan’s questions make me realize how much everyday knowledge I take for granted. Today, he was asking what gets mowed with a lawn mower. The grass? Yes. The mulch under the neighbor’s tree? No. The driveway? No.

Another Ethan first: He named a missing tune.

Ethan has four music boxes in his bedroom, some or all of which we wind as part of the bedtime ritual. Depending on how well studied he is of late in the Big Book of Bedtime Stalling Tactics, the ritual can outlast the springs on some of the music boxes. Today at naptime, Beth wound up the windmill, the bear, the lion, and the round music box, but before she could take her leave, Ethan asked her to wind the windmill back up. Since there were still three music boxes playing on, Beth hadn’t realized it was stopped. But Ethan knew.

Shortly after Beth wound the windmill, Ethan asked her to wind the lion, which had now stopped. After Beth took care of the lion, finally he was ready to nap.

I’m reminded of when Ethan critiqued an opus; he sure knows his sounds!

Another Ethan first: He tried to defy the laws of physics.

“If Daddy can apply force to the back of the chair to push me in, why can’t I?” 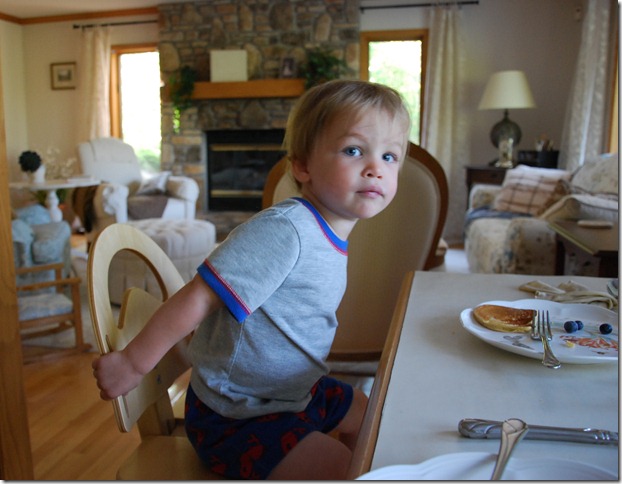