An Eliana first: She pushed herself down a slide.

I put Eliana on the top of the play set in the backyard, just in front of the slide. She scooted forward onto the slide, to the point where she instantly went from slowly creeping ahead to rapidly sailing down the slide. On this cool autumn day, the plastic slide was so slick that she spun around backward before sliding off the end head first on her back into my arms. She had mixed emotions about the adventure, but the feeling that won out was the one that said let’s do this again.

Ed (pointing to my head): "Sometimes you have to use your wits. Do you know what your wits are?"
Ethan: "Yes."
Ed: "Really!? What are your wits?"
Ethan: "Something in your ear."

Ethan on extracting an illustration

"See that nice oxipus I carved out?"

An Eliana first: She put a puzzle together. 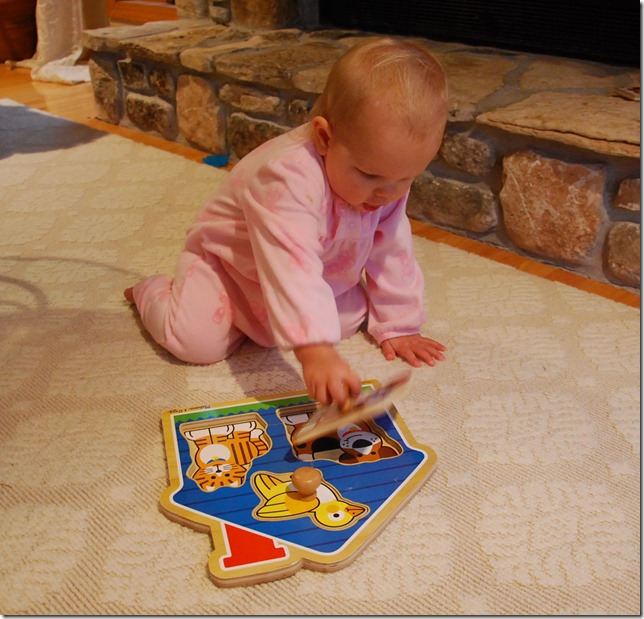 An Eliana first: She stocked a bookshelf.

Exploring the bookshelf has long been a source of entertainment for Eliana. Besides all the books to flip through, it’s a joy in itself to relieve them of their stifling tidiness lined up on the shelf. Today, however, she found that there can be pleasure in going the other direction. And it’s not just for her, but for Beth and me too, who now have only a slightly assorted stack of books to re-stifle. 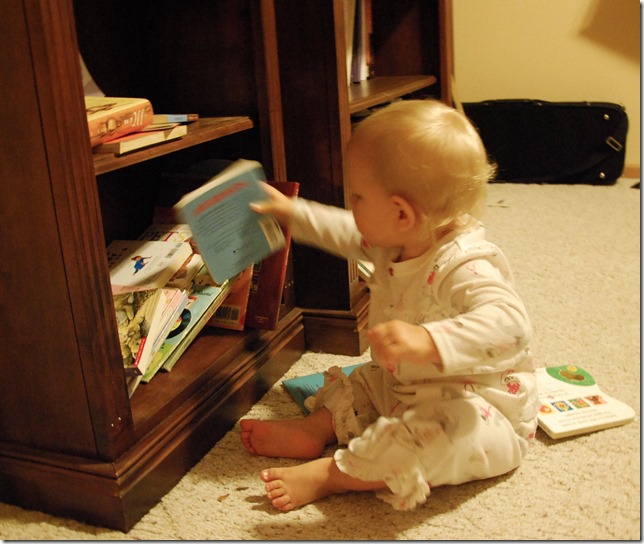 Another Ethan first: He estimated the weight of a wheel loader.

Ethan can count up to around fifty, but beyond that ends up cycling backwards at one of the decade boundaries. The largest number he knows is one hundred. The concept of numbers beyond makes some sense to him, but is quite abstract.

Here’s an example: Ethan asked me to watch him as he rode his tricycle over the garden hose. The act itself wasn’t what interested him; it was just an object lesson for what followed: “A wheel loader would break the hose. It's a hundred heavy.”

Another Ethan first: He made up stories.

Ethan and I were uprooting juniper bushes, river rock, and a failed weed barrier, from the backyard to make way for a garden next spring. Along the way, he decided to tell me a story. Then he gave a title for a story to tell him. Back and forth we went. No doubt influenced by the book The Penguin that Hated the Cold, his story titles were always about something not wanting to do what it normally would. He told me tales like, “The Grass that Didn’t Want to Get Stepped On” and “The Shovel that Didn’t Want to Dig”.

During my turns at storytelling, I took advantage of his attentive ear to develop themes on the different ways that the problems of discontentment can play out. In “The Lawn Mower that Didn’t Like Spinning Blades”, its wise owner help it see its potential. The “The Excavator that Didn’t Like Dirt”, however, had no mentor, and it ended up freezing in the winter because it never dug the foundation for its house. In a piece of historical fiction, “The Dinosaur Who Didn’t Like Eating Meat” was happy when he learned that he lived at a time when God meant for him to only eat plants.

Regardless of who was storytelling, all the characters could talk. For my stories, Ethan named the characters. Whereas for me coming up with names is difficult and time consuming, for Ethan it was effortless. It was the same way with the story titles; he could instantly come up a new title at any time.

To me, these are one-time stories, coming and going with the wind, leaving no opportunity to retell or talk about them, because I can barely remember them. It’s not so with Ethan. I had long forgotten my telling of the “The Rope That Didn’t Want to Pull Out Junipers”, who had a good heart, but who just wasn’t strong enough for the job the farmer asked of it, and finally helped the farmer see where he could be properly used. I only remembered the story because a week later, out of the blue, Ethan told me about how happy he was for the rope. It reminds me how much I look forward to Ethan finding his proper place as he develops his own life story.