Another Ethan first: He uncovered a laser.

The CD portion of our combo iPod/CD/radio player had been on the fritz with a skipping habit. After breakfast, Ethan and I went at it. Plan A was to clean the lens for CD laser, but it was blocked by a plastic cover. I could tell it was designed to move aside in operation, but I didn’t know how. After patiently enduring my unsuccessful fiddling, Ethan asked to turn one of the gears. As he did, the laser moved from its initial inner-most position toward the disc outside position. 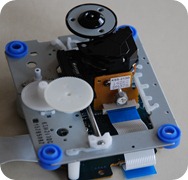 Immediately, the laser cover opened. The design quickly become apparent: the cover mechanically closes when the laser is in the inner-most position, probably a parking position used when the tray is open. With Ethan’s help, the lens was now easy prey for my alcohol-laden cotton swab.

It turned out that cleaning the lens didn’t help, or at least not enough. The solution was to adjust a tuning potentiometer (looks like a white screw) next to the laser. I’m still thankful for Ethan’s out-of-the-box intuition; he helped me get over the first hurdle. 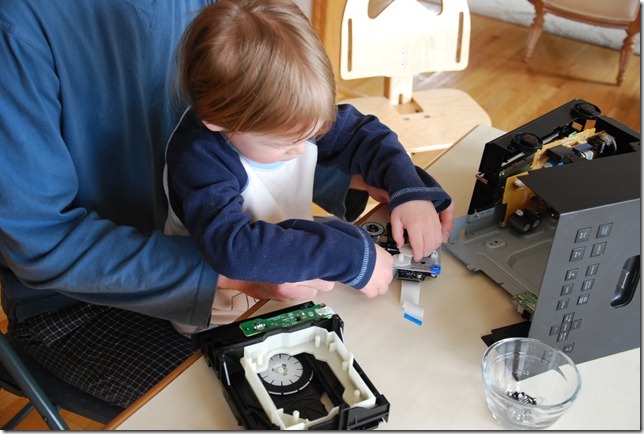