Another Ethan first: He prepped the pizza toppings.

Ethan has long enjoyed helping make pizza. He started as a cheese sprinkler. (You might say he “shared” the cheese with the pizza.) Later he moved to pepperoni and other toppings. In the last few weeks, he has taken interest in tasting the raw ingredients like flour, sugar, and salt (and baking powder if we’re making pancakes).

Today, he pulled up a chair, opened up a package of mushrooms, and started slicing them with a butter knife. Other than orienting the knife cutting side down, all I did was encourage his initiative. He ended up slicing about two thirds of the mushrooms.

After the mushrooms, he tried helping peel the garlic. That was still beyond him. But he did dump the flour in the mixer (before sampling some, of course).

I can see Ethan progressing to first-rate pizza making before we realize it. The day he no longer wants to “share” the cheese – that’s harder to imagine. 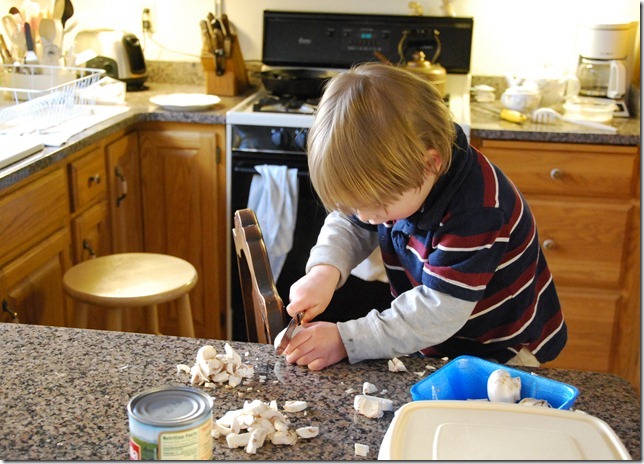