That cute little curl at the knap of the neck.  How long do I let it get before it is time to cut?  Daddy kept saying that it was getting too long. “But once it’s cut, it’s cut, and then he officially becomes a little boy.  Hmmmm…. maybe it’s not too long… yet.   Maybe just another week.  Okay, let’s wait until he’s 18 months.  Well, now that he’s 18 months, it really isn’t that bad.  It has hardly grown since two weeks before when we were considering.  It’s really not time.  His hair is thin, and that extra curl adds a little more volume at the bottom.   And, if we cut it, it might not be long enough of a piece to save.  We need a nice piece for the baby book. ”  When he turned 18 months, I looked long and hard at his curl and decided I just wasn’t ready yet.  But, a week later, as I was looking at him from the back, that curl was definitely starting to uncurl because it was getting longer and heavier.  It was time.  I put him in the high chair, gave him some kitchen utensils that I normally don’t let him play, and cut that little curl.  No tears from Mommy!  Whew.   Okay, that wasn’t so bad, and I have the little curl that I plan to keep forever.  But, now his hair is not quite even.  Okay, cut a little more.  Oh-oh, is that too short?  Just straighten it out.  Okay, there.  Good.  Ethan’s first hair cut.

As the day went on, I felt bad that I had maybe cut his hair too short, but I figured it would grow back  fast.  The most disappointing thing was that after all that trauma for Mommy, it took Daddy about two days to notice. 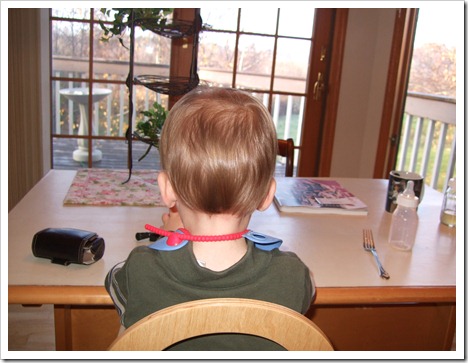