The crib is the toy chest; return of the flying buns 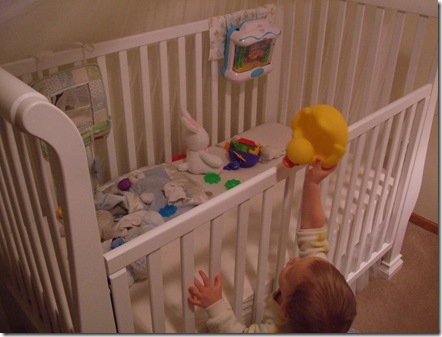 Tonight Ethan got it in his head to throw every toy he could find into his crib. He’s at the height where his extended arm reaches just above the top of the lowered side rail. The result was the highest velocity throws that I’ve seen from him. The position of the rail forced him to fully extend his arm and release at the apex of his motion. We’ll dig out all the toys that shot against the wall and dropped below the crib later. 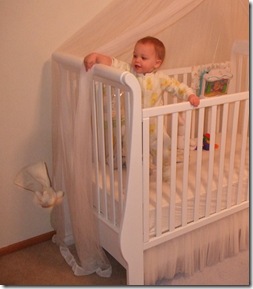 Once he was in the crib, he began unloading. Everything went flying, even the buns, which had stopped going overboard a couple months ago (they started flying almost a year ago). There was one exception, however: Ethan made the motion to throw his favorite stuffed companion, Big Blanky Bun, but never let go.