Another Ethan first: He de- and re-alphabetized the fridge.

Ethan has a Leapfrog toy that says the names and sounds of letters that are placed into the unit. Ethan enjoys hearing those and the alphabet song, too. He also likes taking the letters off the fridge and distributing them randomly or in selected locations in the kitchen. As part of trying to teach Ethan to pick up his toys, I’ve been encouraging him to put the letters back. It’s been slow going, achieving just a few letters one at a time before surrendering to lure of Ethan’s distraction of the moment.

Today, however, Ethan was in a mood for a mission. He wanted to remove letters he couldn’t reach. They were there intentionally, but I decided to risk the potential for a disaster area and got him a bench to act as a step stool. Soon the letters were everywhere. A bit later, after a couple false starts, I told Ethan he was going to put all the letters back on the fridge, and away he went! In a few minutes, 23 letters from near and far were back where they belong, a good job worthy of accolades and yummy puffs. (B and J were already on the fridge holding the list of non-toxic and ocean-friendly fish; A seems to be on sabbatical at the moment.) 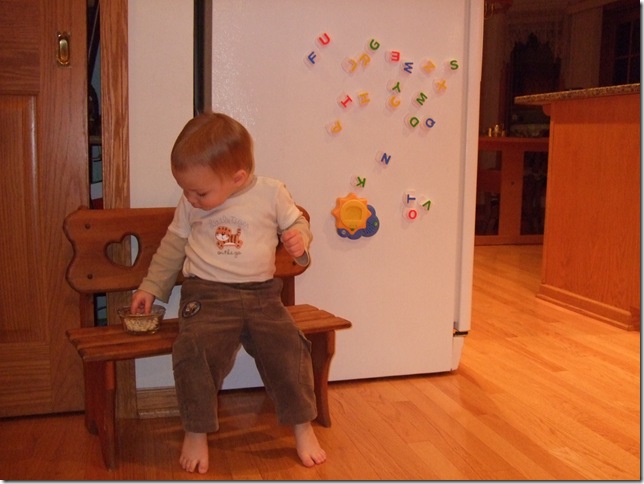 (I didn’t anticipate the effort required to take the picture. The Heisenberg Curiosity Principle has set in: the act of observing a subject with a camera changes the state of the subject being observed—because the subject finds the camera so fascinating.)