An Eliana first: She loaded a video.

It took less than 24 hours for Eliana to discover that the cabinet storing all our videos and CDs was without its child-proof latch. She found the video “The Mysterious Islands” and walked it over to the TV. I think she liked the picture on the case. She opened the Xbox tray, took out the Kinect game disc, set it aside (instead of in its case – naughty), removed the video from its case, loaded it into the Xbox, and closed the tray.

In everyone’s eyes except hers, Eliana is far too young to be manipulating discs or an Xbox, but she apparently had spent months secretly learning the necessary skills by watching her parents and brother. No one had any idea what she was doing until the Xbox controller app on the PC I was using indicated that the Xbox had been turned on. I went downstairs expecting to find Ethan trying to figure out to start a Kinect game by himself. Instead, Ethan was outside, and only our little girl was in the basement.

Not wanting to disappoint her, I spared sharing the detail that the video she chose was Blu-Ray, which Xbox 360 doesn’t support. I stuck with the “discs are too fragile for little girls” theme, which she took well. 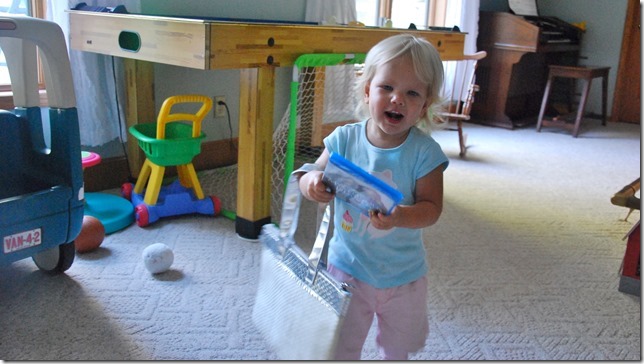