Another Ethan first: He played the string bass. 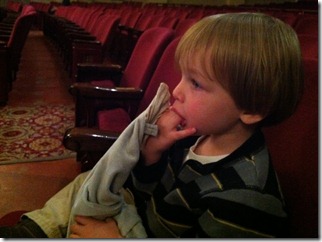 I took Ethan up to the last full rehearsal before Beth’s orchestra concert. The violins, French horns (“She puts her hand in there!”), trombones, xylophone, and timpani especially captured his imagination. He watched attentively for more than half of the three-hour rehearsal. Ethan may well have been content in his initial seat, but I wasn’t so patient, wanting to show him different instruments and perspectives. We walked around the orchestra, tried out the balcony and its wings, but mostly watched from up close on the main floor.

There was one other instrument that captured Ethan’s interest, his favorite of all: the string bass. At break, we asked a bass player we knew well if Ethan could play his instrument. Mr. Brian showed Ethan the basics, and emphasized that it was important to pull the string tight before letting go to get a good sound. Ethan has a strong grip and had no difficulty filling the hall with his music.